A style change! Book 1's theme coming home to roost! And the first time ever we get to see Alexander with another face and another name.

This chapter is the culmination of an aspect of Alexander's personality that I had presented throughout the course of Book 1: his hunger for conquest and breaking records. We saw his desire to hold on to his worldly achievements, to overcome death, to master the impossible monster horse, defeat a rival, see the world, and conquer more lands/defeat more rivals in his lifetime. This thirst for life, for being ambitious, and for never settling is what Arrian calls his 'pothos' (longing).

Alexander's longing is a motif of interest in many works about him, especially in the Alexander Romance -- where it's treated as both something to admire and a warning against the kind of greed or spiritual emptiness that comes from never being happy with enough. There's a moralistic, almost religious tone to the warning (which makes sense, as many variants are based on an Abrahamic core) -- go beyond the divine and you'll be humbled. Look down upon the earth, Alexander!

One of the legends in the Romance that touches on this theme is The Ascent of Alexander, a popular story in medieval Europe. The story's pretty much what's presented in the first half of the chapter: Alexander attempts to claim the heavens using griffins and a nonsensical chariot-throne. Then the angels scold him for his audacity, for daring to take posession on God's domain when he's barely known the entire world, so he gives up the project -- whether violently (by crashing) or peacefully. 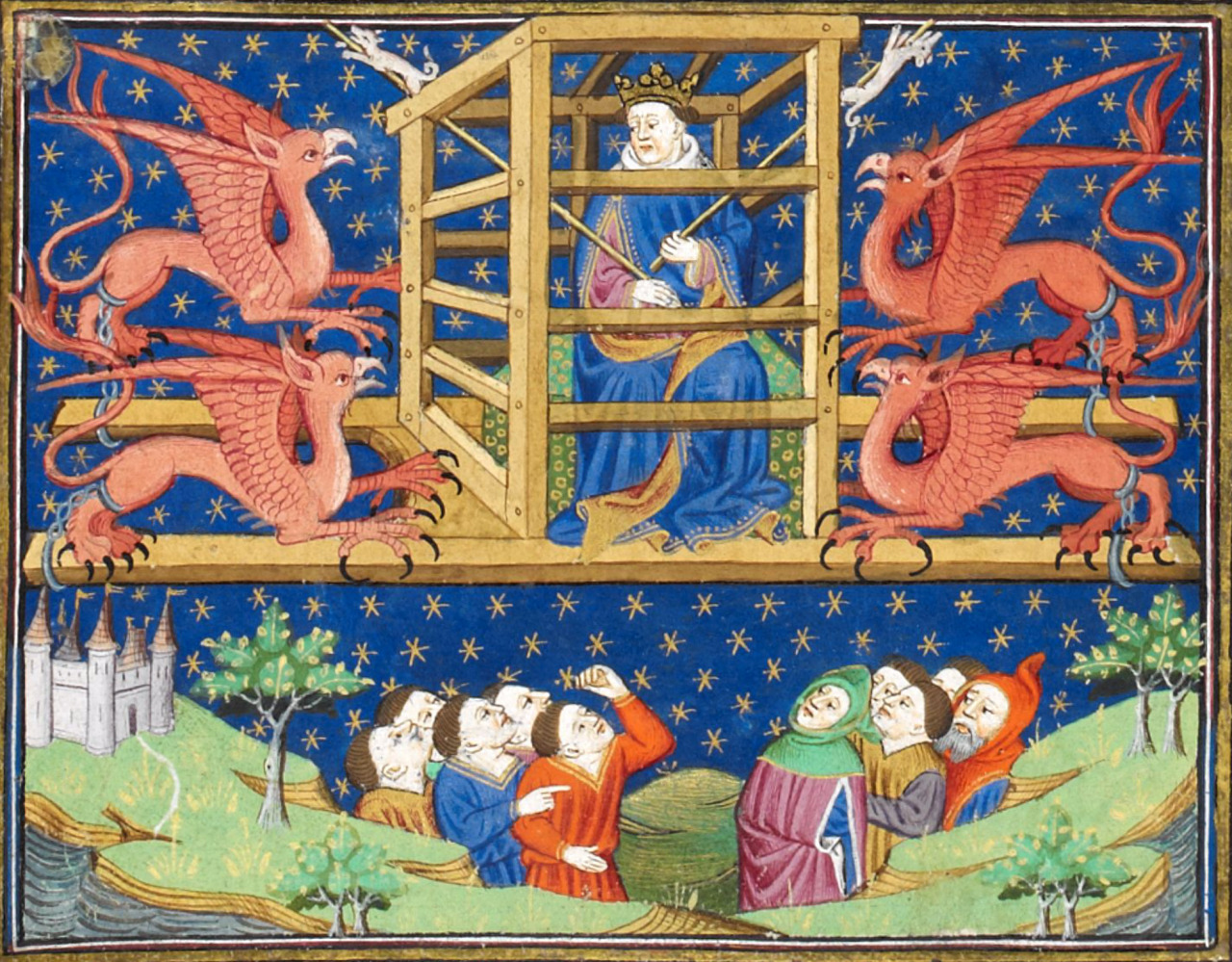 I'm not a religious person however, so my Alexander Romance is not interested in the religious reading, even though it does support the secular reading I'm interested in. Which is this: conquering personalities are toxic and they need to be stopped.

I'm being a bit facetious, but there is a reason behind this. Leaving aside the part where he was an actual warlord brought up in a conquering culture, I view Alexander's personality as analogous to the culture/personality type represented in start-up tech and game industries: workaholic, passionate, ambitious young men with a lifelong desire to "disrupt" established norms, to break records, to achieve unicorn levels of wealth and success. Demanding that their team members or employees match their extreme energy levels -- to take unpaid overtime, to disregard health, to ignore family, to sacrifice work-life balance -- for the sake of going beyond for the project, and behaving irrationally/angrily when they realise their team cannot make those same choices.

We see this most clearly in the Hyphasis mutiny in 326 BCE. This mutiny is interesting to me, and is included in this chapter, because it actually shows the toxicity of Alexander's passion, that it demoralised and harmed his people, that it can be weaponised to manipulate and guilt. Alexander had asked so much of his army to keep moving into Asia with no break, and almost none of them had gone home to Greece since their departure 10 years ago. 10 years!! Keep in mind that a huge part of the Greek army consisted of farmers, peasants, merchants, basically ordinary not-upper-class folk. To be away from home for so long in danger, in an unfamiliar place where you don't speak the languages, and at risk of life is incredibly difficult -- emotionally, physically, mentally.

Here is Arrian's recounting of the Hyphasis mutiny, starting with Alexander's speech from Chapter XXV to his defeat in XXVII.

For lack of space in the comics medium, I didn't manage to include Alexander's long speech attempting to convince his exhausted, burnt out, literally-in-rags army to keep pushing for more more more, but I hoped I got the gist of it across in the annoyed retort to Coenus.

Though there is something to admire about Alexander actually being on the ground with his men, marching and battling and risking his own life, there's a disingenous vibe about it when he weaponises his own participation to dismiss his army's burnout (to me anyway, being way too deep into internet and tech culture and having seen the many crashing and burnings of disruptive unicorn, great-man companies like WeWork, Facebook, Twitter, Blizzard, etc). The imbalance of power, privilege and access to safety between Alexander and his army must be recognised. Like many of the startup unicorns, both they and Alexander are advantaged by access to cultural, educational or economic power, and surrounded by a powerful network of who will protect them and feed them well (which many of the ordinary do not have). To put it simply, he never had to carry his own luggage. Recognising this does not discount the ideas or efforts of Alexander and his ilk, but it puts into perspective why they are able to maintain the energy to keep pushing themselves.

The army and the griffins broke because of Alexander's hunger.

The story that comes after is another famous one: of Alexander sacrificing his own cup of water so he can be in solidarity with his dehydrated, starving men as they go through hell in the desert.

Here's the other side of Alexander's willingness to share the spoils and scars of his men: that he is committed to be in solidarity and express the "good" parts of kingship: of responsibility and care. Of recognising suffering and to not benefit himself when he is given the choice to avoid said suffering.

Of course, we can all say what Alexander did is silly -- he could have just distributed the water instead of yeeting it away. In the 21st century, I don't think we're that impressed anymore by that performative expression of leadership. But it was something back then, and another reason why Alexander was held as a model king for centuries to come.

Both this desert story and the Hyphasis mutiny add to Alexander's complexity as a character, and there will be more of this type of pairing-of-stories to come.

The transcript for the medieval style portions is written in decasyllabic blank verse. It's not exactly iambic pentameter or consistent in meter all the way since I want to maintain some relationship to the default free verse (which has no meter except cadence, following the voice, and I have no aim for literary genius), but I kept it mostly all in ten syllables. I changed the writing style in the transcript to complement the change of visual style in the comic itself.

The dialogue in the comic tries to keep itself to decasyllabic blank verse wherever possible.

The Author's Voice is in alexandrine verse -- a 12 syllable verse with 6-syllable halves, indicated by a caesura, which gets its name from the French Alexander Romance.

Book 1 is an introduction to the narrative structure of the entirety of my Alexander Romance: a linear quest supported by non-linear flashbacks, anecdotes and legends that are thematically related.

It follows the East Asian 4 Act structure, known as kishotenketsu, which is my natural style of writing. A subject is introduced (Alexander and his greatness), explored and developed further (many anecdotes of his ability to dominate), followed then by an unexpected paradigm shift (the angels, philosophers) and finally, reconciliation of the shift with the original thesis (Alexander sacrificing his kingship). There are some other subjects being planted here that have not yet seen their shifts; I will let them blossom when the time comes. ;)

As mentioned, Book 1's theme is about Alexander's desire for conquest. Book 2 will follow up on a different aspect of his character, and will take us to Macedon more fully.

Sketches: Sketching took me an absurdly long time. In fact, making Chapter 7 was such a struggle that I lost track of how long most stages took. It didn't help that the entire time during its making I was followed by deadlines, travel, illness (not Covid) and then my first case of Covid. :/

Inks and colours: As mentioned above, Chapter 7 was a struggle. Somehow, the medieval style rendering was so much time for so little progress despite its deceptive simplicity. I kept running out of patience.

No PDF for inks and colours since most pages are exactly what's shown on the archive.

This is the first chapter where we see the many names and faces of Alexander. Each metamorph is based on or inspired by depictions of Alexander in medieval jewellery, illumination and carving (listed in the author's footnotes at first appearance). The layouts also borrow a lot from illumination, though I regret not having the brainspace AND the patience to actually push the visuals to its most experimental. Luckily there will be more opportunities to come... Hopefully not in a sustained way, because the physical act of rendering those pages was not pleasant.

(I will probably pursue a longer ramble on my blog)

I am overall very happy with Book One, but it's kinda being held back by its purpose as an introductory story out of narrative necessity. So I don't feel it's emotionally or artistically affecting me the same way The Carpet Merchant did, which is fine. Alexander Comic hasn't yet come into its full power. I haven't yet completely grown into what this project demands of me. The good thing now is that, with Book 1 done, I know what the baseline is. And I am ready to go very hard now on Book 2.