The Alexander Romance is chock full to the brim with fantastical adventures, monsters and places. This discovery both surprised and delighted me when I first stumbled upon it in 2017, as my original (very dim) idea of Alexander the Great didn’t involve Arthurian-like shenanigans. Once I understood the breadth and depth of said shenanigans, as well as the possibilities I could play with as an author, I was immediately on board.

Many of these strange imaginings were inspired in their own way by Alexander’s real-life travels in Babylon and India, offering us insights as to how the ancient world understood and transferred knowledge about foreign lands via the medium of story. Some of the monsters and landmarks that originally appeared in the Romance eventually carried over to other, later literature and maps of the medieval world. For example, The Travels of John Mandeville, and the Hereford Mappa Mundi. And if you have ever heard of the men with large ears, folks with faces on their chest, and the dog-headed people: you can thank the Romance for popularising them.

While the details may change, some fantastical aspects remain consistent across many versions of the Romance – including mine. On this page I’ll be cataloguing and explaining the most popular set pieces, though they aren’t necessarily the wildest ones!

I’ve also simplified the set pieces to make them digestible and approachable. If you are interested in more detail, there is a reading list at the bottom of the page. 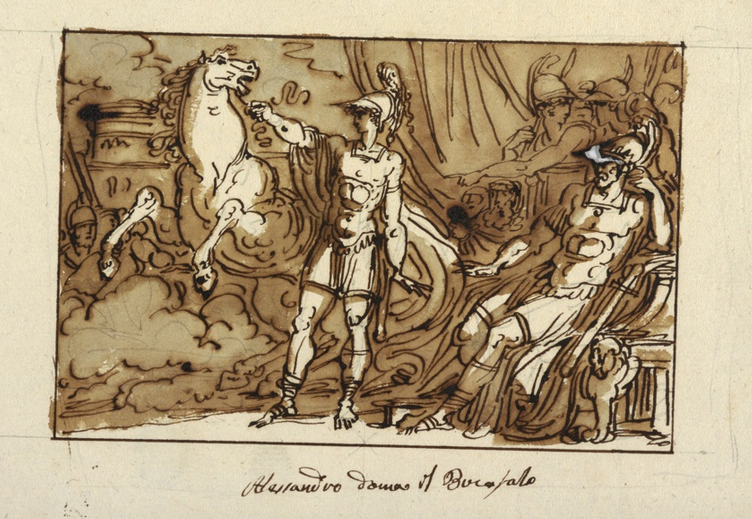 Alexander is holding the restraints of an agitated Bucephalus. King Philip watches at the side, seated on a throne. Source: Felice Giani (1795), Cooper Hewitt Museum

The Taming of Bucephalus

Bucephalus is a figure as legendary as his rider, so of course he gets his own fantastical origin story, of which we get two basic variants

In both versions, there is either a prophecy or an implication that if Alexander manages to tame Bucephalus, he will go on to rule a bigger empire. Not surprisingly, Alexander succeeds, and for many centuries afterwards, they will ride together across the annals of history and legend.

The whole point of this story, besides being a really good anecdote, is to show that Alexander has always possessed an unusual greatness within him, even as a young boy. His natural charm and ability to observe and creatively solve problems – skills that would later contribute to his success as a warrior king – are in full display here. It’s a pretty effective valorising piece.

Alexander’s Father is Not Phillip

For some reason, the Alexander Romance authors didn’t think Phillip was interesting enough to be Alexander’s real father. So they made up their own alternatives: he was the son of the last Egyptian pharaoh (who was also a sorcerer and could take on the shape of a god and a serpent); the son of a Persian king (making Alexander the half-brother of King Darius); and the son of Zeus-Ammon (a story which Alexander himself may or may not have believed). 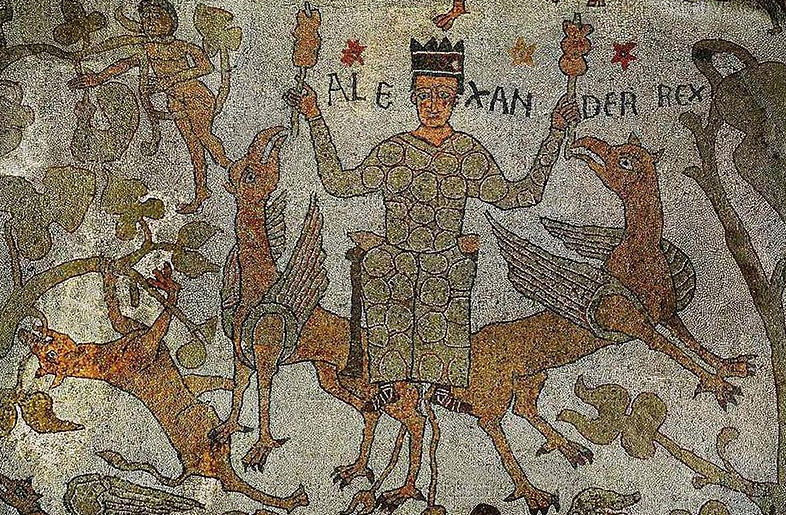 Alexander in a cloak and a typical crown, sitting on a chariot astride two griffins. He’s waving two chicken drumsticks in the air. Source: Floor mosaic of Otranto Cathedral, Italy

The Ascent to Heaven on a Chariot of Griffins

A popular European motif found in cathedrals. On one of his journeys, Alexander encounters some griffins and pursues an elaborate plan to ride them, involving a chariot and delicious kebabs. He flies high up towards the heavens, and gets scolded by a (heavenly?) voice telling him to just… stop it 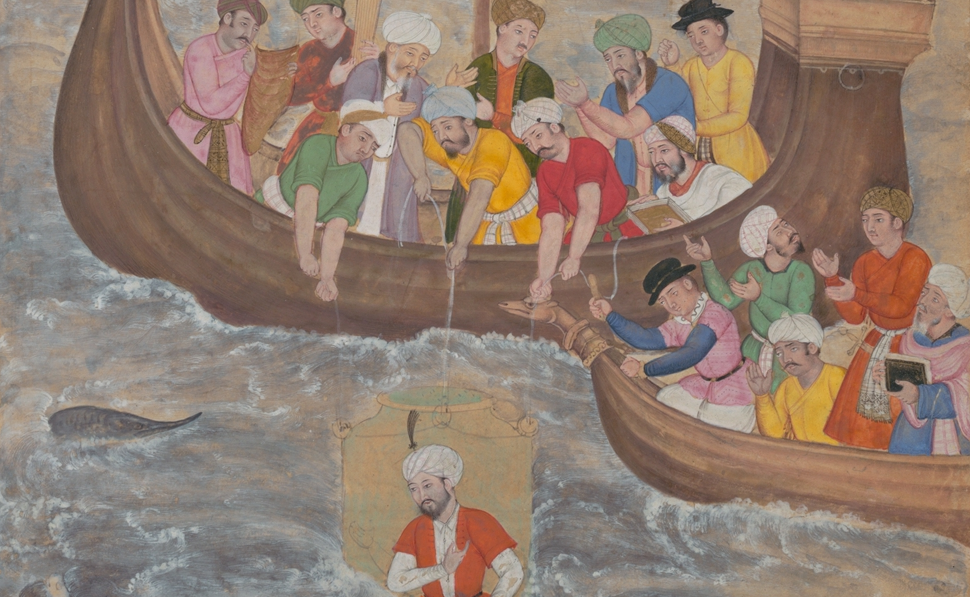 A group of men in two large boats lower Sultan Iskandar into the sea. Iskandar is inside a glass container. Everyone is wearing turbans and kaftans. Source: The Khamsa of Amir Khusrau (1597-98), MET Museum

Not satiated by the sky, he decides to explore the sea instead. He gets his men to build a submarine (often drawn as a glass bell or cylinder), which he then enters and goes to see all the fishes and spooky things underwater. Occasionally there will be a dramatic story involving a cheating spouse who fails to hold on to Alexander’s lifeline above water. He always comes back out afterwards.

Meeting a Queen in Disguise

At some point, Alexander will meet a foreign Queen and pretend he is not who he actually is. The Queen is clever though, and uncovers Alexander’s lies by showing that she owns his portrait, so she knows what he looks like and that he can’t fool her.

The Philosophers, Monks and Brahmins

Alexander encounters a bunch of people who have given up all materialistic desires in life, and they encourage him to do the same. They end up having a lengthy discourse about Alexander’s thirst for power, his egoism and desire to conquer, the futility of greed in the face of death, and other related threads. Alexander isn’t convinced though… but maybe this time, things are different?

Not very far after his meeting with the philosophers, he will visit the talking trees. He asks them about his future and they give him terrifying omens about his upcoming death. 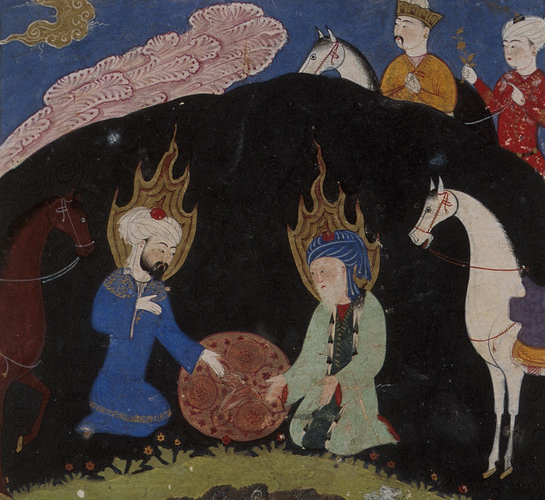 Iskandar finds the prophets Khizr and Ilyas at the Fountain of Immortality in the Land of Darkness. Source: Iskandarnama, LACMA

The Land of Darkness and the Water of Life

In all Alexander Romance retellings before mine, the Land of Darkness and the Water of Life are nothing more than incidental set pieces among others. Basically, Alexander travels to a region where no light exists to obtain the Water, but fails to get it and has to turn back. He usually finds his way out with a clever trick. Sometimes as a consolation prize, his entourage are rewarded with jewels they picked up from the ground.

A servant often makes an appearance in this set piece, whether in the form of an ordinary cook or a mysterious figure.

Approaching something but never getting there is a stock trope in Alexander Romance set pieces. It comes up again in stories where Alexander purposefully rows a boat or takes a hike to Paradise, but is then turned away with a warning or a strange gift. (In one of the stories, he is given a Wonder Stone.) 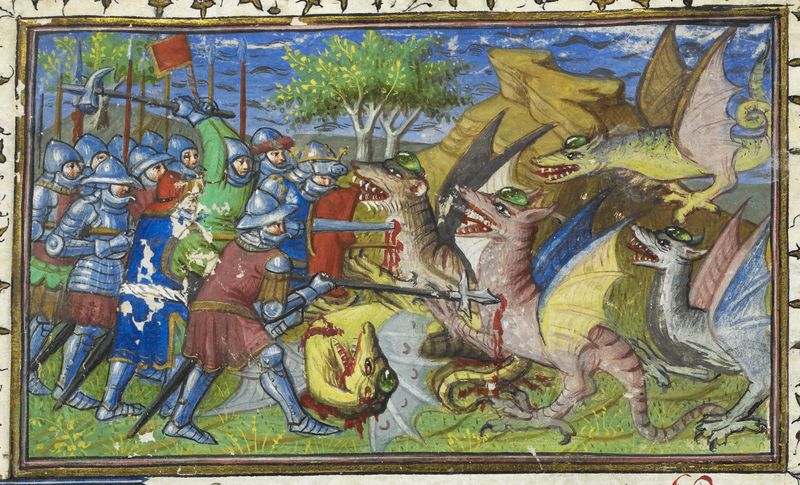 Alexander and his army battle a horde of dragons with emeralds on their foreheads. Source: Royal MS 20 B XX, f. 73r, British Library

Strange Monsters to Fight a la an RPG game

Alexander and his men are forced to battle a series of weird monsters scattered across the Romance: a man-eating giant, hybrid animals, giant crabs/ants, angry trees, fairies and more. Sometimes there are more interesting enemies, like an automaton or a castle with fancy sci-fi traps.

Gog and Magog and the Wall

Alexander is said to be the hero who built the wall keeping out Gog and Magog and the Apocalypse, thereby preventing the destruction of the world. At some point in the future, the wall will crumble, and that is when Judgement Day begins.

Nobody knows how Alexander died really. The Alexander Romance attributes it to poison: one day Alexander drinks from a goblet and immediately degrades afterwards. He writes a will. A different group of philosophers gathers around for an eulogy. Bucephalus exacts revenge on Alexander’s murderer before dying from grief. Sometimes Alexander’s wife will die alongside him too.

1. Alexander the Great: A Life in Legend (Richard Stoneman)